The São Paulo Arbitration Week (SPAW) is a collaborative event conceived as an organized calendar for law firms, universities, associations and institutions to promote events in a productive environment in benefit of the development of ADRs.

The event is an opportunity for the ever-growing arbitration community in São Paulo to discuss pressing issues and to exchange experiences with foreign practitioners.

Therefore, and considering the wide range of events happening in October connected to the subject, SPAWs role is to facilitate and gather all the information concerning these events.

An opportunity such as the São Paulo Arbitration Week could not be missed.

The Centre for Arbitration and Mediation of the Chamber of Commerce Brazil-Canada (CAM-CCBC) has the great pleasure to present you the VIII Edition of our traditional CAM-CCBC Arbitration Congress.After seven

The Centre for Arbitration and Mediation of the Chamber of Commerce Brazil-Canada (CAM-CCBC) has the great pleasure to present you the VIII Edition of our traditional CAM-CCBC Arbitration Congress.

After seven years of development and enhancement, we managed to create one of the most relevant arbitration events. Join us once again to discuss the today and the tomorrow of arbitration in this experience that promises to be unforgettable.

Twenty-three of the most prominent arbitration figures were handpicked to address the most relevant subjects presently discussed. Be prepared to dive into the pros and cons of choice of forum, the legitimacy of arbitration, the substantive changes in arbitration proceedings, the debate on transparency, new trends in institutional arbitration, and the future of international dispute resolution.

For the first time in history, broadcasted from a 3D studio and completely free of charge, we will soar over the supposed winter of the method and have a glimpse of the spring yet to come in the near future of arbitration.

Brace yourselves, the VIII CAM-CCBC Arbitration Congress is coming.

Organized by Dentons and MAMG Advogados

Enforcement and Monetization of Arbitral Awards

19oct12:0013:00Enforcement and Monetization of Arbitral Awards

19oct17:0018:00Re-engineering Construction Arbitration - designing a process which is fit for purpose 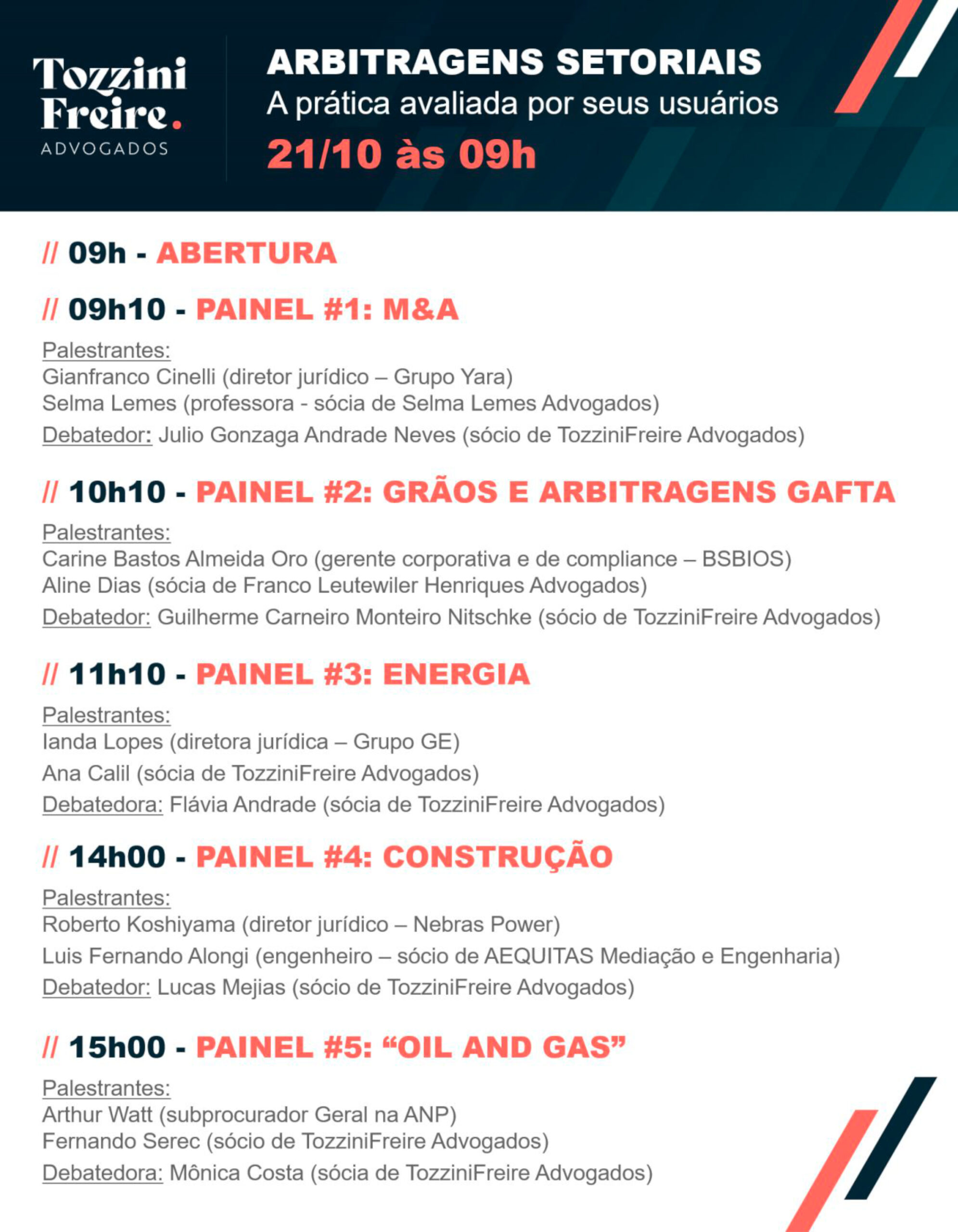 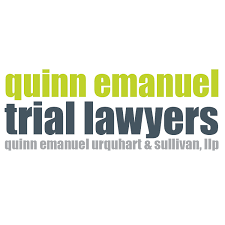 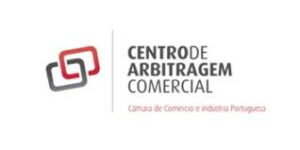 Young ITA’s regional leaders for Brazil and North America invite you to a webinar to discuss the use of arbitration in the context of bankruptcies, corporate restructurings, and other scenarios related to corporate insolvency and financial distress. In a roundtable format, we will discuss practical issues that arise at the intersection of insolvency and arbitration, from both the Brazilian and the U.S. law perspectives, as well as recent developments in the area (including the new IBA Toolkit on Insolvency and Arbitration and the new Brazilian Bankruptcy Act).

To explore these challenging issues, we will have the pleasure to receive the following panel of outstanding practitioners:

Lidia Rezende, Young ITA North America Chair, Chaffetz Lindsey, New York
Lidia Rezende is an Associate at Chaffetz Lindsey, LLP in New York, where she represents clients in international and domestic commercial arbitrations under the ICC, SCC, UNCITRAL, LCIA, and AAA rules, and in litigation before U.S. courts. Lidia received an LL.M degree from NYU Law in 2015 and an LL.B degree from Universidade Federal de Minas Gerais in 2010. She is admitted to practice both in New York and Brazil and is a native Portuguese speaker. Her cases focus on matters of construction, infrastructure, oil and gas, insurance and reinsurance, Foreign Sovereign Immunities Act (FSIA), complex contract disputes, and matters at the intersection of common and civil law. Prior to joining Chaffetz Lindsey, Lidia practiced for five years at a mixed law and engineering boutique firm in Brazil, working side by side with civil engineers in complex construction matters.

Jennifer Permesly, Skadden, Arps, Slate, Meagher & Flom LLP, New York
Ms. Permesly is a Partner in the International Litigation and Arbitration Group of Skadden Arps Slate Meagher & Flom LLP in New York. She regularly appears as an advocate before international arbitration tribunals and U.S. courts in disputes relating to complex, cross-border commercial transactions. She has significant experience in disputes arising in the construction, energy, mining and technology sectors, and with claims involving foreign sovereigns or state-owned entities. A Spanish speaker, Ms. Permesly focuses much of her practice on disputes arising out of Latin America.
Ms. Permesly has been named in Chambers Global, Chambers USA and Chambers Latin America, and she has been recognized in The Legal 500 U.S. and The Legal 500 Latin America for her skills in international arbitration. In Chambers USA, clients refer to Ms. Permesly as “hands down the most responsive lawyer I’ve ever worked with;” as a young practitioner who is “firing on all cylinders,” and as “very articulate, very focused and very skilled” as an advocate. Ms. Permesly also has been named one of Latin America’s Top 100 Female Lawyers by Latinvex every year since 2016, and as a Future Leader in arbitration by Who’s Who Legal, which quotes sources who state she is “consistently at the very top of her game and admired throughout the profession.”
Ms. Permesly currently serves as the co-chair of the International Bar Association’s Insolvency and Arbitration Group, which in 2021 published a Toolkit on Insolvency and Arbitration to provide guidance in situations where a party to domestic or international arbitration also is subject to insolvency proceedings. She also serves as the chair of Global Advisory Board Relations for the New York International Arbitration Center, an organization she was closely involved in establishing.

Eduardo A. Mattar, Padis Mattar Advogados, São Paulo
Eduardo Augusto Mattar boasts more than 20 years of experience and is a founding partner of Padis Mattar Advogados. He focuses on arbitration, insolvency, and special situations, and has represented some of Brazil’s largest companies and financial institutions, as well as some of the world’s major hedge funds, private equity firms and sovereign investors in Brazil’s most complex litigation, arbitration, and judicial reorganization cases. His current portfolio includes high-profile cases in the oil & gas, infrastructure, energy, retail, banking and financial services industries. Eduardo is often described by its peers as a “versatile” lawyer (Legal 500) and a “leading light in the Brazilian restructuring market” (WWL Ranking). The directories also highlight his reputation before his clients, which praise him for being “a very pragmatic and commercial lawyer who understands key issues and conveys them clearly”, ”very articulate and organized” (Chambers and Partners), “a fantastic lawyer” and a “restructuring expert” (WWL Ranking). Eduardo is a frequent speaker in legal conferences and courses. He has also authored several articles and chapters in specialized publications and books.

We look forward to having you with us, and please feel free to bring any questions you might have for our speakers!

If you would like to register, please use the following link: https://www.cailaw.org/eventRegistration.html?e=2857

*Please note that this webinar will be conducted entirely in English, without simultaneous translation into Portuguese.

**To comply with all health recommendations related to the COVID-19 pandemic, our webinar will be entirely virtual.

Created and developed by CAM-CCBC – Center for Arbitration and Mediation in collaboration with AMCHAM Brasil, CAMARB and CIESP/FIESP.

Created and developed by CAM-CCBC – Center for Arbitration and Mediation in collaboration with AMCHAM Brasil, CAMARB and CIESP/FIESP.

SP Arbitration Week | The São Paulo Arbitration Week (“SPAW”) is an annual initiative organized by the Center for Arbitration and Mediation of the CCBC (“CAM-CCBC”), consisting of an online platform (https://www.sparbitrationweek.com.br/) in which all events related to alternative dispute resolution (“ADR”) occurring in the second-to-last week of October of each year are gathered. The initiative’s objective is to raise awareness of São Paulo as a safe international arbitration seat and to promote dispute resolution in the country and abroad.

Rules | These are the rules for the 2021 SPAW (“Rules”). The Rules are reviewed annually and are subject to change from one edition to another. Reliance on any past rules or practice will not in itself be an acceptable excuse for the failure to comply with the Rules of the current SPAW.

Language of the SPAW | Any written communications concerning the SPAW will be published in English, including the wording of the Rules and the website. For internal communications, the CAM-CCBC’s Organizing Committee (“Committee”) is fluent in English, Portuguese and Spanish. Nevertheless, we request that all information concerning events be sent exclusively in English. In case information about an event is sent in Portuguese only, the Committee will freely translate it for the platform.

Language of events | The Committee strongly recommends that the events inform the language of the panels and the availability of simultaneous interpretation to and from English.

Enrollment Fee | Enrollment of an event in the SPAW will be complete with the payment of a donation to a social entity. The minimum symbolic enrollment fee is of R$ 100.00, although higher contributions are most welcome. CAM-CCBC has listed some options below, which are not mandatory:

Deadline | Registration in the SPAW platform will be accepted from 14 July 2021 until 04 October 2021. In the exceptional case you will not be able to meet the deadline, please contact us at [email protected], preferably before the deadline.

Speakers | The events registered in the SPAW platform must include at least 30% of female speakers.

Satisfaction survey | A satisfaction survey form will be available at the SPAW website. We kindly request that you mention the survey to your event’s attendees and fill the form with your impressions of the platform, so we may improve it.

Mention of the SPAW | The website or invitation of the event shall mention its enrollment in the SPAW and include SPAW’s logo.  We request that such materials are sent to the committee for approval.

Social media | The Committee may promote the events registered in the SPAW in CAM-CCBC’s social media, prior, during and after the SPAW. Each day of the SPAW, the agenda will be published on social media.

Website | All information requested in the SPAW platform registration form will be published in the SPAW website in up to 10 (ten) business days after receiving of the form, if the event meets the requirements.

Report | A group of people selected by the CAM-CCBC will produce small reports concerning SPAW events, which will be available in the SPAW website after the end of the week. The aim of the report is to publicize the contents of each event for those who did not have the opportunity to attend.

Attendance | Considering the necessity of production of the report, we kindly request that each event reserves one complimentary registration for attendance of the person who will produce such document.

Contact Details | All communications regarding the SPAW platform shall be sent by email to: [email protected]. Questions concerning each individual event shall be sent to the organization of the event.

The Satisfaction Survey of the SP Arbitration Week 2021 aims to assess the quality of the platform provided so we may improve it in its next edition. It also aims to provide a feedback from participants to the organizers of the events that took part in SPAW’s initiative. It will not take more than 5 minutes. We thank you in advance.